VPC Needs Your Help to Raise $100,000 in 2017 to
Support the Tufton/Worthington/Greenspring Roundabout 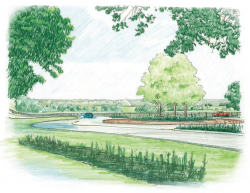 Valley residents have been concerned for years about the safety and traffic flow at the intersection of Tufton/Greenspring/Worthington avenues. During rush hours, it has grown increasingly difficult and dangerous to make left turns. In addition, speeds are increasing on these roads, making it less safe for all users.

VPC met with elected officials at the state and county level who were able to secure funding for 90% of the $1 million project. This left a gap of $100,000, which VPC has committed to raise. While it is unusual for a community to contribute to a public infrastructure project, the partnership will result in a far better solution that will be a lasting asset for the area.

Read MORE about the roundabout.