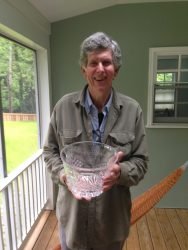 The Valleys Planning Council (VPC) presented its prestigious McHarg Award to environmental writer Tom Horton at its annual meeting on May 9th at St. Thomas Church in Owings Mills. Tom Horton is a native of Maryland’s eastern shore. He attended public schools in Federalsburg, Maryland and graduated in 1967 from Johns Hopkins University with a degree in Economics. Following military service he began a career covering the Chesapeake Bay and the environment at the Baltimore Sun, retiring in 2006.

Tom is a Professor of Practice in Environmental Studies at Salisbury University. His areas of expertise include Chesapeake Bay politics, cultures, science, nature writing, journalism and experiential education. He is also a columnist for the monthly Bay Journal.  Horton is one of the most respected nature writers in the U.S., winner of the John Burroughs Award for the best book of nature writing in 1988, as well as the David Brower award from the Sierra Club, and other awards from the Chesapeake Bay Foundation and the Audubon Society. Tom lives in Salisbury and spends his free time on bicycles and in kayaks.

In addition to teaching courses about the Chesapeake Bay and nature writing at Salisbury University, Horton is a freelance nature writer, working for National Geographic, Rolling Stone, the New York Times Magazine, Chesapeake Bay Magazine and others. His assignments have ranged from famine in Africa to the Amazon Rainforest, oil spills in Alaska, and coral reefs in Australia. He is the author of eight books about the Chesapeake Bay. He recently paddled his kayak 550 miles around the Delmarva Peninsula and co-teaches a summer kayaking/camping course, “Exploring Delmarva: A Water’s-Eye View.”

“His insights into local land use and environmental issues, and his skill in writing about them, have made a big difference in the outcome of many proposed projects and policies in Maryland,” said Teresa Moore, executive director of the Valleys Planning Council. “For decades, he has helped inform environmentalists and the general public about the importance of healthy fisheries, streams, and watersheds, and how poorly managed growth can have severe impacts on our ecological systems.”

The McHarg Award was created to honor a person who exemplifies the goals and mission of The Valleys Planning Council by his or her actions. This award honors the spirit and legacy of Ian L. McHarg, a Scottish landscape architect and a renowned writer on regional planning using natural systems. McHarg was the founder of the department of landscape architecture at the University of Pennsylvania. His 1969 book Design with Nature pioneered the concept of ecological planning and continues to be one of the most widely celebrated books on landscape architecture and land-use planning.  McHarg prepared the original Plan for the Valleys in 1962.  He received the National Medal of the Arts from President George Bush in 1990 and won the Japan Prize for city planning in April 2000. McHarg died in 2001. Vintage footage of the colorful McHarg talking about ecologically-based landscape planning can be viewed in a film produced for the Valleys Planning Council in 2012, Designing with Nature: The Plan for the Valleys.

After being notified that he had been chosen as the 2017 recipient of the award, Tom noted that he has McHarg’s Plan for the Valleys on his bookshelf and featured that work in the first edition of his book, Turning the Tide.