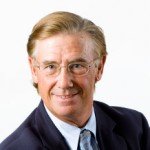 The Valleys Planning Council presented Phillip W. Worrall its prestigious McHarg Award at its annual meeting on May 12, 2015 at St. Thomas Church in Owings Mills. Worrall is a Principal Emeritus of GWWO Architects.

Worrall received the award for his lifetime efforts to preserve land and fight urban sprawl. As chairman of the Baltimore County Planning Board, he sought the down zoning of 12,000 acres of agricultural land in 1996 — more than 9000 acres were eventually re-zoned to RC-2, the most restrictive zoning in the County. This effort protected the County’s most sensitive agriculture and watershed areas from inappropriate suburban development and lessens the demand on county services.

“Phil has been a force for land preservation, often behind the scenes, but creative, persistent and effective,” says Doug Carroll, VPC Board Member and Chairman of the McHarg Award Committee. For more than 20 years, Phil’s ongoing vision, understanding and focus, sparked basic changes in attitudes toward planning and development and culminated in the first and largest downzoning since the advent of CZMP (Comprehensive Zoning Map Process) in the late 1970’s.

A longtime preservationist, Worrall, also donated a conservation easement to Maryland Environmental Trust on his 160 acre farm. He served on the Board of Directors of the Valleys Planning Council from the 1970’s through the 1990s. Of the many accomplishments, Worrall worked with Ian McHarg’s firm to create the addendum of the Plan for the Valley, the landmark land preservation plan for Baltimore County.

Created in 1962, the VPC conserves open space in Baltimore County; protects agricultural, natural, historic and scenic resources; and works with stakeholders to promote a balanced and rational use of land for the benefit of present and future generations.